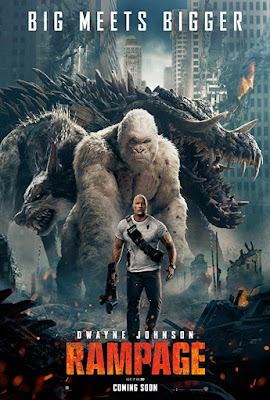 When three animals - including an albino gorilla named George -  are exposed to a pathogen, their DNA is combined with that of other animals, causing them to mutate into massive animal hybrids. In order to stop them, Primatologist Davis Okoye (Dwayne Johnson), the man responsible for George's care must team up with Geneticist Dr. Kate Caldwell (Naomie Harris) and government agent Harvey Russell (Jeffrey Dean Morgan). But to do so, they'll have to contend with the military's attempts to destroy the creatures and a shady corporation responsible trying to cover up their involvement.

Now I know what you are thinking, this movie looks really stupid. And you would be right, it's big, stupid, cheesy, over the top nonsense. But despite all that, it's actually quite fun! A lot of that is down to the big man, no not George, Dwayne 'The Rock' Johnson. If anyone else made this movie it would be relegated to the same category as Sharknado and its many sequels, but Johnson has this innate talent for getting us past the ridiculous aspect in order to make these movies entertaining. Now this doesn't always work, Baywatch demonstrates that even The Rock can't save some movies from being terrible. I think it helps that at no point does Rampage take itself too seriously. There's even a Rampage arcade game machine in the evil corporate office where "Project Rampage" was thought up. 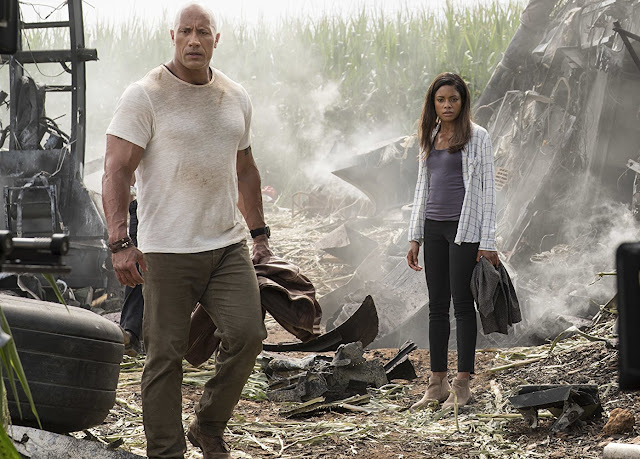 For the most part the performances are good. Despite the over-the-top nature of the story most of the actors manage to keep things closer to ground level, leaving the big stuff to their CGI co-stars. But that hasn't stopped Johnson from bringing his larger-than-life personality - and some incredibly cheesy one-liners - into the mix. His character has a really fun relationship with George, and thanks to the motion capture work of Jason Liles it's a relationship that feels genuine. After all this is the root of the story, saving his friend is the one and only reason for Davis getting involved. 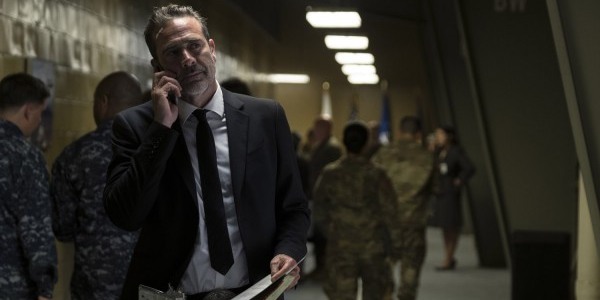 Naomie Harris does well opposite Johnson, she isn't given a great deal to do but she does a good job of making the science sound plausible...to us non-scientists anyway. I think the writers were wise to avoid a romance between the two leads, although George has something to say about that. Malin Akerman is ok as the generically evil CEO Claire Wyden. It's her on screen brother Brett (Jake Lacy) that we could do without. I'm guessing he's supposed to be the comic relief, but bar one satisfying scene he is nothing short of annoying. The man who seems to be having the most fun though is Jeffrey Dean Morgan, he revels in the role of Russell, a government man who just gets things done. And it pays off too, because he is easily the best thing about Rampage.

As you can imagine with a movie of this scale, the visual effects are impeccable. Director Brad Peyton brought in Weta Digital - the obvious choice given their experience on the Planet of the Apes movies and Peter Jackson's King Kong. All three creatures look phenomenal, if I didn't know better I'd say George was real, he looked that good. The only strange thing is both Ralph (wolf) and Lizzie (crocodile) take on traits of other animals where George just gets bigger, something that isn't recognised let alone explained. The action scenes are pretty full on throughout, the movie even gives the plane scene from Tom Cruise's The Mummy a run for its money! But they turn things up about five notches for the finale. Effects Supervisor Erik Winquist and his team used motion cameras and 3D scanners to recreate downtown Chicago, allowing them - or should I say George, Ralph and Lizzie - to accurately destroy parts of the city.

Dwayne Johnson has found a way of making 80's movies for the 21st Century. They're ridiculous, over the top cheese! But beyond that they're two hours of hilarious, action-packed escapism. It's a movie that knows what it is and just runs with it. I went into this expecting to be mildly entertained at best, and ended up enjoying every minute of it. Dare I say it, this could be the best movie adaptation of a video game to date.
7.5/10