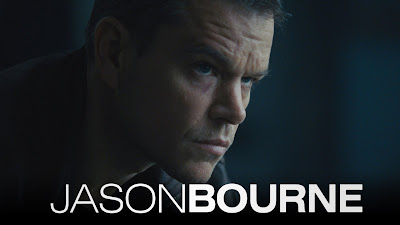 I don't usually write spoiler filled reviews because I don't see the point. But considering my not so positive review of Jason Bourne, one of the most highly anticipated movies of Summer 2016, I thought it might be worth trying to explain why I reached the verdict I did. If you haven't seen this movie stop reading because there are spoilers ahead. Click here to see the spoiler free review. 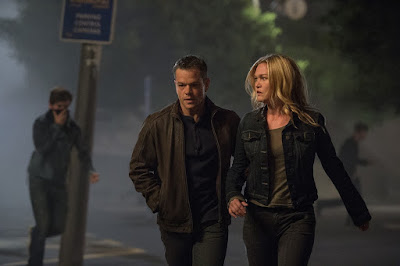 The movie begins with Bourne in Greece. He's laying low, making money by competing in underground fights and still struggling with his past. He lacks purpose which is making him miserable. Nicky Parsons on the other hand is busy hacking the CIA in order to expose their black ops programs. So far so good. But when Nicky finds something out about Jason's (or should I say David's) past, she heads to Greece to find him. Unfortunately her activities have drawn the attention of CIA Agent Heather Lee (Alicia Vikander), a cyber ops specialist who begins to track her. Using a riot as cover Nicky meets with Bourne but before they can discuss anything two CIA field teams move in on them. The ensuing motorbike chase is proof that Paul Greengrass hasn't lost his touch where action is concerned, it's exciting and very well filmed. But it ends in the most predictable manner, Nicky is killed by an Asset (Vincent Cassel) sent by CIA Director Robert Dewey (Tommy Lee Jones), I'll get to those two later. So already this movie is a rehash of The Bourne Supremacy; Bourne has been in hiding, a bad guy shows up, there's a chase and it ends with the girl being shot and killed and a crash. If I could see this coming based solely on a trailer how many others did? 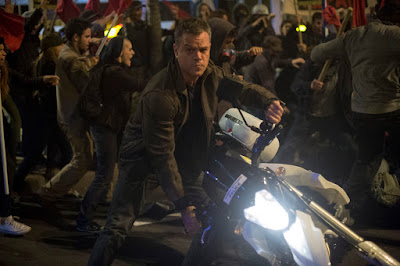 Before she dies, Nicky gives Bourne the information. It's stored on a secure flash drive so Bourne heads to Berlin to meet with the hacker Nicky was working with in order to access it. This is where the story unnecessarily delves back into Bourne's past, it turns out his father, Richard Webb was the Analyst who originally developed the Treadstone program. But he tried to expose the program when his son was picked as a candidate. In order to prevent this from happening the CIA had Richard Webb killed in a way that looked like a terrorist attack. David Webb witnessed the attack which became his reason for joining Treadstone, giving Bourne something to remember in increasing detail later. So the father invented Treadstone and then tried to expose it, then the son became not only the first Agent to join but the best Agent as well and he was the one who exposed the whole thing. If that isn't enough coincidence for you, there's more. Robert Dewey was the one who ordered the assassination of Richard Webb and it was carried out by the same Asset who killed Nicky. This Asset has a real grudge against Bourne because when he exposed Blackbriar, Asset was compromised and endured two years of torture in a Syrian prison. This web of connections sits somewhere between highly unlikely and absolutely ridiculous. 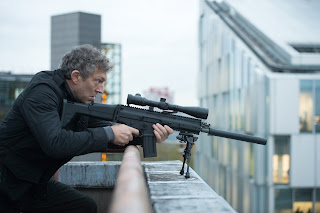 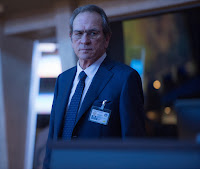 The information Bourne has leads him to a former CIA Agent based out of London called Malcolm Smith. Smith is a surveillance specialist now working in the private sector. Back in the early days of Treadstone, Smith was responsible for surveilling potential candidates. Bourne snatches Smith from under the CIA's nose and takes him to the roof of a nearby building to interrogate him. When Asset finds them he tries to shoot them, Bourne uses Smith as a human shield and when Smith is shot both men fall off the building﻿,  but not before Bourne recognises Asset as the man who kills his father. This is where it starts to get a little unrealistic because Bourne manages to grab a convenient cable (see the above picture), this part is in the trailer. The cable breaks at one end, wraps around his ankle and prevents him from falling to his death like Smith. However, he does slam into some sort of out house, something that would kill or seriously injure one of us regular folk whereas Bourne suffers a head injury (see picture below) and is still able to walk away before Asset can get to him. 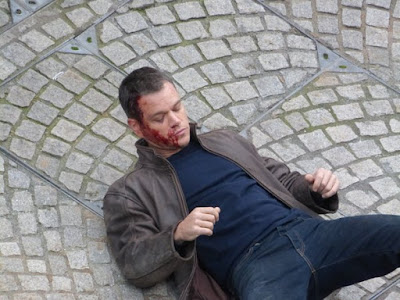 The action then moves to Las Vegas where Robert Dewey is speaking at a tech conference. Also speaking at the conference is Aaron Kalloor (Riz Ahmed), the owner and developer of a social media company called Deep Dream. Kalloor's start up was funded by the CIA as part of an initiative to more easily monitor online terrorist activity. However, Kalloor - now a billionaire - has suddenly developed a conscience and wants to sever ties, something Dewey won't allow. This storyline, although the most interesting and relevant in a post Snowden/Wikileaks world needed more development. The writers should have binned the Richard Webb storyline in favour of this one but the problem is how does that draw Bourne out of hiding? In the end it became something for Bourne to get in the way of when it could have been so much more. Dewey tries to have Kalloor assassinated and Bourne prevents it at the last second despite not knowing the details. Maybe as part of a standalone movie the Kalloor/Deep Dream storyline could have worked but in its current iteration it doesn't fit well with a Bourne movie and therefore felt forced and unnecessary. Bourne was already coming for Dewey and Asset, it didn't matter where they were and why. It was also a waste of a talented actor like Riz Ahmed.

Bringing me to my last issue with this movie; the armoured truck chase on the Las Vegas strip. Now before I get into it, this is a very exciting chase that is a beautiful piece of cinematography and thrilling to watch, something the Bourne movies are known for. But usually they're more grounded in reality. Firstly both Bourne and Asset have gunshot wounds. I doubt that Bourne's Dodge Charger﻿ would have kept going while enduring the level of damage that it did. In fact if you look at the GIF's I've included you can see that it sustains a front end impact that doesn't set off the airbags. The armoured S.W.A.T. truck that Asset is driving could endure the crashes well but it would take forever to reach the speeds depicted and even in the best circumstances it wouldn't manoeuvre anywhere near as well. I have to admit, the shots of the truck barrelling through traffic, flipping cars left and right is incredible. After all of those crashes the Dodge Charger ends up on the roof of the armoured S.W.A.T. truck, at which point both vehicles crash into the entrance of a casino, causing Bourne's car to flip over the armoured truck and land on the pavement while the armoured truck itself crashes through the entrance into the slot machines. How the crash doesn't kill Bourne I don't know, but he somehow manages to get out of the vehicle, chase down Asset who's now armed with an assault rifle, beat him to death and escape the army of cops that's still searching for him. Overall I think Paul Greengrass was competing with the chases from his previous movies and that's a real shame. He doesn't have to out do or go bigger than what he has done before. I can't deny the chase looks amazing but it lacks the realism that I love about the other chases in the franchise.

I think I was looking forward to this movie more than any other in 2016 and my verdict of underwhelming makes me think they should have left Bourne in the shadows. That's everything I have to say on the lastest instalment in The Bourne Saga. I hope it hasn't bored you too much. If I've made a mistake or you have a different view on the movie please feel free to share it, either in a comment below or on our FaceBook and Twitter pages.﻿