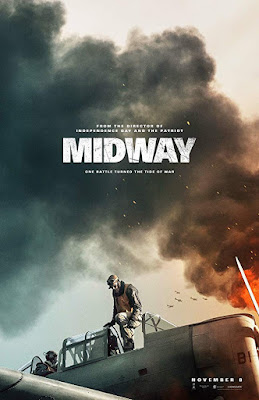 The Battle of Midway was one of the pivotal battles in the Pacific Theatre, during World War 2. In his first project since Independence Day: Resurgence, Roland Emmerich will tell the story of the men who fought on both sides - although he won't be the first. The teaser trailer is here (check it out below), here's what we thought.﻿

This is a World War 2 movie on the scale of Independence Day, "epic" would be the word I'd use to describe it. I mean, does Roland Emmerich do anything small when it comes to making movies? It's definitely a style he has made work before, and it certainly seems appropriate for telling a story like this. Especially when he appears to be incorporating the attack on Pearl Harbor and the Doolittle Raid into the story - both were factors in the Imperial Japanese Navy's decision to attack Midway. But I can't help wondering if he's bitten off more than he can chew. Midway will likely have a three hour-ish runtime, will that be enough to tell all those stories and do them justice?

If the trailer is anything to go by, Midway will be an intense and action-packed war movie. In order to depict the massive naval and aerial battles, a lot of CGI has been used, and in places it is a little bit ropey - these shots will no doubt be cleaned up by the time of release. But there isn't really any other way to accurately recreate a battle that included four Japanese and three American aircraft carriers (a lot of which are now in bits on the seabed), a variety of naval vessels and hundreds of aircraft. This may only be a teaser, but from what we've seen, Midway will certainly live up to the epic scale we've come to expect of Roland Emmerich.

Midway also boasts an impressive cast; Woody Harrelson, Luke Evans, Mandy Moore, Patrick Wilson, Ed Skrein, Aaron Eckhart, Tadanobu Asano and Dennis Quaid to name but a few. Between them they should certainly be able to convey the magnitude of such an event, and the toll it takes on those involved. But there is a rather large shadow looming over Midway - the movie, not the battle - that of Michael Bay's 'Pearl Harbor'. Bay's depiction of this major historical event was not only highly fictionalised, it was a pretty mediocre movie too. If it came up at all in Emmerich's preparation for Midway, it should be as a lesson in what not to do. You can see from the trailer that the action will be intense, chaotic and on a massive scale - as it should be - lets just hope Emmerich hasn't prioritised spectacle over historical accuracy, as Bay did!


Midway looks to be an epic recreation of one of the most pivotal battles during World War 2, one that will hopefully tell the story from both the American and Japanese perspectives, and as accurately as possible. As long as it doesn't fall into the 'Pearl Harbor' trap, it could be one of the biggest war movies of recent years.


What did you think of the teaser trailer for Midway? Let us know by leaving a comment below or find us on Facebook and Twitter. You can also email us at moustachemovienews@gmail.com