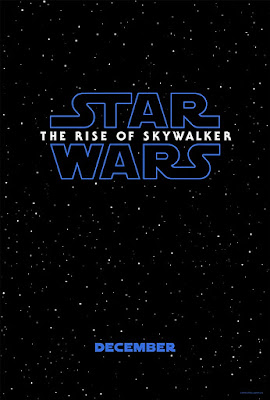 As you're probably aware, the first trailer for Star Wars Episode IX has arrived, and as with many big trailer releases I couldn't resist sharing a few thoughts. If you haven't seen the trailer - or you just want to watch it again - check it out below.﻿

First of all the title. I'm not sold on this yet, not that that is likely to stop me seeing 'The Rise of Skywalker' on the big screen...actually there's no chance I'm missing this! Obviously there could be multiple meanings to this title, which does feel rather on the nose. You could argue that 'Return of the Jedi' had several different meanings, the return of Luke to his home planet, the return of Anakin over Darth Vader, the return of the Jedi Order. But does this new title signify the rise of a specific Skywalker? In which case, how are they rising? Or does it refer to the rise of a new order (led by members of the Skywalker family) that will lead the galaxy into a new era? Given what we have seen in the previous eight episodes, there's no reason to expect an entirely happy ending.

Episode IX is said to be set one year after the events of Episode VIII. Which no doubt means the war between the First Order and the Resistance is in full swing. In previous entries in the sequel trilogy Rey (Daisy Ridley), Finn (John Boyega) and Poe (Oscar Isaac) have all gone on separate missions, but this time they will be working together. What that mission will be is unclear, but it seems to involve searching for a relic of the Galactic Empire, but more on that later. I'm just glad to see these interesting characters finally get a story that brings them together. Especially after the terrible story that involved Finn and Poe in 'The Last Jedi'. I like The Last Jedi overall, but the story that involved Poe's mutiny and Finn's mission to infiltrate a First Order ship was disappointing.

Do we have a new villain on our hands, or is that someone we've known all along? During that incredibly cool sequence involving Rey leaping on to a Tie-Silencer, it is suggested by a glimpse of nothing but the pilot's gloves that it's not Kylo Ren (Adam Driver) behind the wheel. The only definitive shot of Kylo sees him advancing through trees with some Stormtroopers as he floors an enemy with his lightsaber. But who is it in the Silencer? Could it be a member of the Knights of Ren? Maybe one who isn't happy with their leaders choices, or one who's simply looking to seize power. And is the pilot in question the same person seen modifying Kylo Ren's helmet?

Then there's the returning characters from the original trilogy. Mark Hamill is said to be involved, which means we're likely to see another force ghost - could this be "The Rise of Skywalker" that they're referring to? No doubt it is one of them. The late great Carrie Fisher will also return thanks to some unused footage from 'The Force Awakens'. But there are some new (old) returning characters too. Billy Dee Williams is back as Lando Calrissian. It's great to see him back on board the Millennium Falcon and reunited with Chewbacca (Joonas Suotamo). I get the feeling that Han Solo and Carrie Fisher are going to be sorely missed by many this December. Much like his young counterpart - Donald Glover - Williams can really pull off those colourful outfits. Currently we have no idea how he is involved, but he and Chewie clearly have their own part to play, lets hope those pesky Porgs didn't have too much of a detrimental effect on the Falcon.

But the man that everyone is talking about is Ian McDiarmid, who is returning to play (former) Emperor Palpatine. How they managed to keep him under wraps I don't know. We don't knowingly see him in the trailer, but his presence is revealed when we hear that sinister laugh. Could he be the one flying the Tie-Silencer and messing with Kylo Ren's helmet? More importantly, has he been manipulating events all along? Was he connected in any way to Snoke? Whatever the answer, it seems he managed to figure out that way of cheating death after all!

For me, the most interesting part of the trailer comes when our heroes stumble across that relic I mentioned earlier. It seems that the trio's mission will somehow involve finding the wreck of a Death Star, although I'm not sure which one, it could even be a never-before-seen prototype. Whichever one it is, apparently several pieces of it crashed into a body of water on an as yet unknown planet. What are Rey, Finn and Poe looking for? And how will it help the resistance? As Chirrut Imwe once said; "The strongest stars have hearts of Kyber." could that be what they seek? Whatever it is, after a lifetime scavenging Imperial technology on Jakku, Rey is certainly best qualified to find it. But is this where they will find Palpatine? That sinister laugh can be heard as the Death Star wreck pans into view, maybe he has been trapped in there all of these years, using his powers to plunge the galaxy into darkness once again. Luke has already demonstrated what a powerful force user can do from the furthest reaches of space.

I have just one final question at this point: what is the deal with BB-8's new little buddy? It looks like the result of a one night stand between Gizmoduck and a hairdryer!

I think it's fair to say that I am very impressed with what I've seen in this trailer. Granted I have loads of questions, but that's what a great trailer does; gets us excited and fills our minds with questions. No matter what you're thoughts on the recent instalments in the Star Wars story, after seeing this trailer I can't imagine you being anything less than excited to see how the Skywalker saga will come to an end.

What did you think of the first trailer for Star Wars: The Rise of Skywalker? Let us know by leaving a comment below or find us on Facebook and Twitter. You can also email us at moustachemovienews@gmail.com