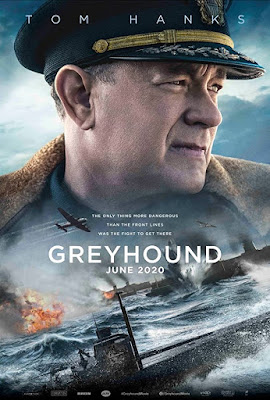 Greyhound is the lead ship in an escort group assigned to protect a convoy of merchant ships crossing the Atlantic in World War 2. Captain Ernie Krause (Tom Hanks), a career Navy man in his first command, must lead the fight against a wolfpack of German U-Boats. But will he be able to fight off the silent hunters long enough to get the convoy to the safety of British waters?

If ever there was a reason for you to sign up to Apple TV+, this is it. Much like Christopher Nolan said about Dunkirk, the movie Greyhound is more of an experience than a movie, which makes it a real shame that we didn't get to see it on the big screen, as it was intended. After a very brief introduction, the audience is thrown into the hell of life onboard a ship in the middle of the Atlantic in 1942. The whole story is told from the point of view of Captain Krause and his crew. Events are witnessed from the deck of the Greyhound and the occasional aerial shot, the German U-Boats are only glimpsed briefly as they circle the convoy in a rather ghostly fashion. This makes for an incredibly authentic experience, a real insight into the life of a sailor. With the crew constantly on the lookout for the enemy, the tension kicks into high gear from the moment we get onboard, and doesn't let off until the very end. Director Aaron Schneider makes clever use of the soundtrack to keep it that way even when the action is occurring elsewhere, and Greyhound is forced to observe the attacks on other ships from afar. It's in these moments that the urgency is almost palpable, as the crew race to respond.

Based on the book 'The Good Shepherd' by C.S. Forester, it's clear that every effort has been made to be as accurate as possible. Everything from the sets, to the lingo, you may not always understand what's being said but it's always clear what's going on. Tom Hanks, who gives a magnificent performance as the Captain, also serves as screenwriter - which certainly explains the dedication to accuracy. He brings real weight to a character burdened with immense responsibility, you can see how it weighs on him, how he constantly questions himself, and the fatigue that comes with it. The almost faceless crew helps to emphasise the Captain's lonely position, he barely knows these men and yet he's responsible for them, and all the other ships in the convoy. In turn, the crew's care and concern for the Captain is seen through Rob Morgan's performance as the ship's Head Chef, not to mention the ridiculousness of segregation. But Krause has help in the form of Stephen Graham's Executive Officer, Charlie Cole. The two actors have worked together previously on Band of Brothers, and it's evident from their chemistry. They look like a team, especially when the men are looking to them for orders or guidance.

Greyhound does for the Battle of the Atlantic what the Normandy beach scene in Saving Private Ryan did for the D-Day landings. The movie is a real eye-opener, not just to the perils of life at sea in war time, but the sheer difficulty of it too. Fuel and ammunition supplies, faulty or unreliable equipment, all of this has to be considered and then goes completely out the window the moment a U-Boat is spotted. The way the U-Boats are shot, it's more like they're haunting the convoy rather than hunting it. They will pop up, attack, and disappear back into the murky depths in terrifying fashion. But Greyhound and the other escort ships are hindered in their ability to respond by a great many things, things I had never even considered. It's fascinating to see, and a fitting tribute to the men who actually had to do it. 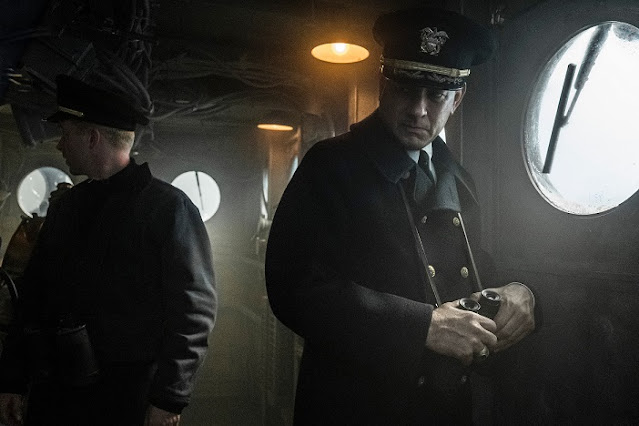 Tom Hanks' return to the genre of World War 2 is definitely a welcome one. Greyhound is a gripping and tense experience from start to finish, one that will show future generations the sacrifices made by so many in the Battle of the Atlantic. And although it's a shame we didn't get to see it on the big screen, it's more than worth the price of an Apple TV+ subscription.
9/10 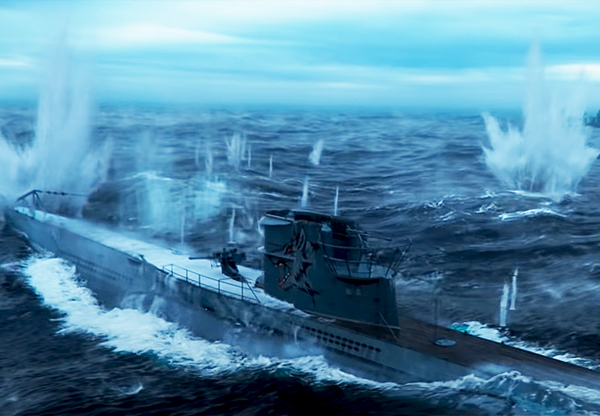