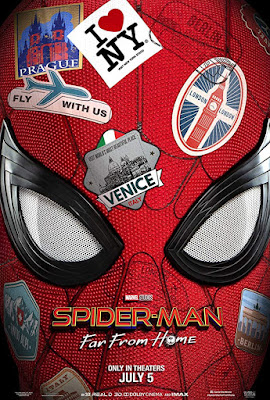 Well it has finally arrived, and the first trailer for Spider-Man: Far From Home does not disappoint. Here's what we thought. Needless to say the trailer does contain some spoilers for Avengers: Endgame, so read on at your own peril...

Not seen the trailer yet? Check it out below:

First of all, this is a great trailer, lots of intriguing snippets and no real spoilers - apart from the aforementioned Endgame spoilers anyway. Jon Watts returns as director, continuing to develop the story and characters first seen in Spider-Man: Homecoming. Peter (Tom Holland) is still working as the friendly neighbourhood wall-crawler, something Aunt May (Marissa Tomei) is aware of. With the help of Happy Hogan (Jon Favreau), they are using Pete's alter ego to do some charity work. There might even be some sparks flying between Happy and May. 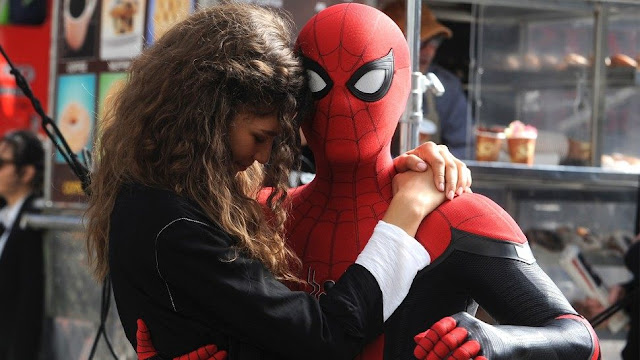 With a school trip to Europe on the cards, the teenage Avenger is looking forward to just being a teenager for a while, even electing to leave his suit behind. It's good to see that MJ (Zendaya) is still messing with...well everyone, but mostly Pete. And Flash Thompson (Tony Revolori) is still a giant dick, something Revolori seems to excel at playing. But this being a superhero movie, we all know that the holiday isn't going to last long. And sure enough, someone shows up in need of his help.

*This is where those Endgame spoilers come in*

It seems that a resurrected Nick Fury (Samuel L. Jackson) is looking to recruit Spider-Man. Their first encounter looks to be a lot of fun, it has a very Bond-esque feel to it, even Ned (Jacob Batalon) likes it, and he ends up unconscious. Fury - and I'm guessing the reformed S.H.I.E.L.D. as well - have two people they need help dealing with. The first is Hydro-Man, well I assume it's simply Hydro-Man because he utilises several different materials to...errr...materialise - is that the right word? Throughout the trailer he's seen using water, sand and what appears to be some sort of molten material. Could this be some sort of combination of the character with Spidey's other nemesis; Sandman? The two did combine in the comics to become Mud-Man, or is this just the type of character melding we're used to seeing in the Marvel Cinematic Universe? 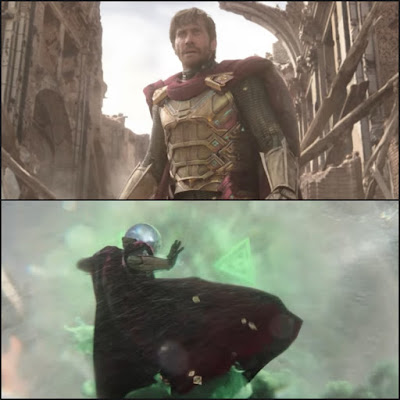 Or does it have something to do with the other featured villain, Quentin Beck, A.K.A. Mysterio (Jake Gyllenhaal)? We only catch a quick glimpse, both with and without the famous fishbowl head/helmet, but I can't help wondering what he's up to. He appears apparently mid-fight with Hydro-Man, only to warn Pete - at least we're led to believe it's Pete, this could be mis-direction - "You don't want any part of this!" After which he continues the fight. The thing is, Mysterio is famous for creating massive illusions, could Hydro-Man be one of those illusions. I think we'd all agree that it could. But why is he doing it? Regardless of whether Hydro-Man is real or not, why are they fighting? Do they have some sort of feud? Maybe one insulted the other's mother, or slept with his wife. Or is Mysterio pretending to be a hero? And for what purpose? What I can say is that with Jake Gyllenhaal in the role, Mysterio is likely to be one of the best villains the MCU has seen, but will he give Thanos and Loki a run for their money? 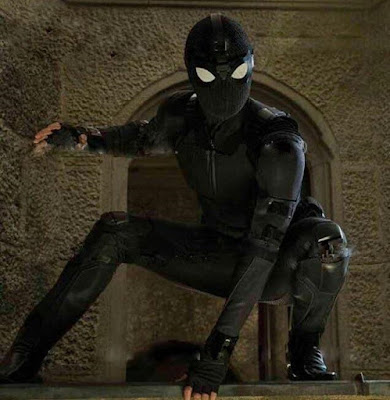 Overall, I have mixed feelings about this trailer. Don't get me wrong, I loved every second of it and I'm really excited to see the movie. Far From Home looks to be another fantastic adventure for the Web-Head, one that's in keeping with the style of Homecoming. Spidey has two new awesome looking suits and Pete appears to have picked up a new mentor along the way, not to mention a mysterious villain or two. 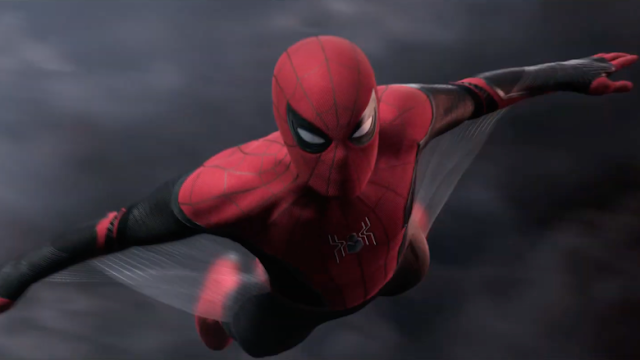 The problem is, this a glimpse into Phase 4 before we've even seen the end of Phase 3, we are deep in spoiler territory here. I genuinely think it's a mistake to release Spider-Man: Far From Home this year. Watching Pete turn to dust at the end of Infinity War was gut wrenching. Now you could argue that most fans were pretty confident that he will return, but I can't understand why a company as secretive as Marvel would give away a spoiler like this. Avengers: Endgame - along with Captain Marvel before it - would still be a great year for Marvel. Endgame marks the end of an eleven year journey and a turning point for the MCU. We should be focusing on that major event, rather than looking beyond it. Marvel could then start fresh in 2020 with Phase 4, and the return of Spider-Man. If you're going to get anyone to spearhead a new phase of Marvel movies, Spider-Man is the perfect choice!

Having said all that, if this trailer is anything to go by, Spider-Man: Far From Home looks to be a fantastic movie. No doubt it will be one of the biggest movies of the summer, if not the year. I for one, can't wait to see it.

What did you think of the Spider-Man: Far From Home trailer? Let us know by leaving a comment below or find us on Facebook and Twitter. You can also email us at moustachemovienews@gmail.com