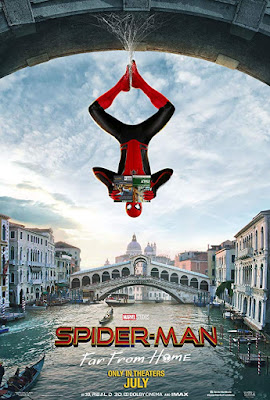 With Endgame taking the world by storm, we're now in a better place to appreciate the aftermath of what has happened. First up, Spider-Man: Far From Home. Needless to say there will be many spoilers for Avengers: Endgame, so if you haven't seen it stop reading now. If you have seen it, but haven't seen the new Far From Home Trailer - or you just want to watch it again - check it out below.

We join Peter Parker (Tom Holland) at a low point in Far From Home. The poor kid has suffered a lot in his life, having lost his parents and his Uncle Ben, now he has the loss of his friend and mentor to deal with as well. It makes sense that the superhero life would be getting a bit much for him, and that he just wants to take a break, be a kid for a while. Obviously this being a superhero movie, that's not going to happen, no matter how many times he ignores Nick Fury's (Samuel L. Jackson) calls. Holland has demonstrated some real talent in this role, and his portrayal of the grief and fatigue looks very genuine. The shot of Pete and Happy Hogan (Jon Favreau) talking about Tony is very touching.

The trailer touches on comments regarding the spidey suits being too Iron Man like. After taking out a room full of bad guys (using the Iron Spider suit) a cop asks him: "You gonna be the next Iron Man, now?" No doubt a dig at the aforementioned comments. This of course leads to some playful banter - something the writers have nailed since Holland's first appearance in Civil War - at least the cops like him and appreciate his help. And it appears we're going to see Pete utilising a couple of new suits in his latest adventure, on top of his original Stark suit and the Iron Spider suit. There's what looks to be a more standard suit which is black and red, Pete was seen using this to glide over the River Thames in the previous trailer. And of course the stealth suit, something we get to see a little more of here. I'm not sure why Pete is sneaking about, but the suit is definitely a little bit more subtle than the other outfits in his superhero wardrobe. Although I can't help wondering if that balaclava mask is as hot as it looks! But the question we should all be asking is; where's Karen? We haven't seen/heard from her since Homecoming where she proved invaluable. 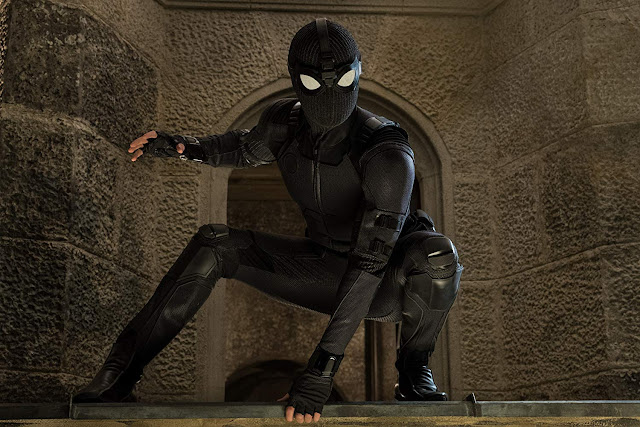 Predictably, Nick Fury isn't happy about being ignored so he adopts a more convincing approach in order to illicit Spider-Man's help. Oddly enough, Fury along with Maria Hill (Cobie Smulders) are already working with Quentin Beck A.K.A. Mysterio (Jake Gyllenhaal), who claims to be from a different dimension. Apparently "the snap tore a hole in our dimension" which resulted in Mysterio - and potentially the Elementals as well - somehow ending up here with us. But is this all part of an illusion created by Mysterio to make himself look like some kind of hero? And if so, what does he really want? What does it have to do with Spider-Man? Is it because Thor is "off world" and Captain Marvel is "unavailable"? More importantly, are the Elementals real? Do they really exist somewhere in the MCU, or are they purely something from Mysterio's twisted imagination? Either way they look pretty destructive! 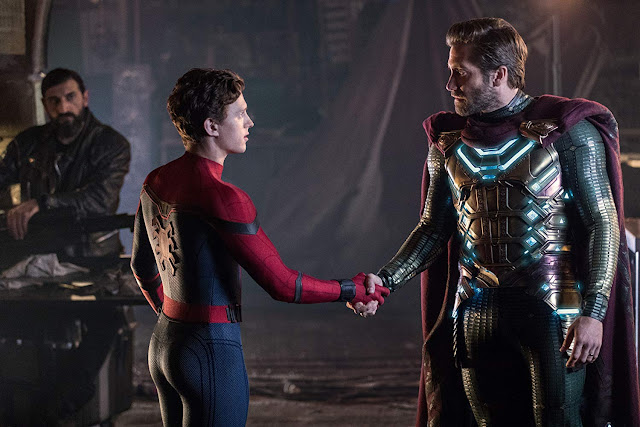 It's fair to say that you can't really trust anything you see in a Marvel trailer, you never know what's misdirection and what isn't. Well that goes double here with Mysterio involved. He seems to have wormed his way in with Fury and the gang though. They seem to trust him, and so does Pete who not only removes his mask in front of him, he has a little heart to heart with the potential villain over a beer...and a soft drink for Pete. Obviously Mysterio doesn't do anything to set off the old spidey senses. But with Pete dealing with his usual issue of balancing being Spider-Man with being a teenager, not to mention a touch of survivor's guilt, he needs someone to talk to, and unfortunately it's Mysterio who's listening. What is he up to? Also, should we read into the fact that Mysterio is wearing a wedding ring in the above photo? 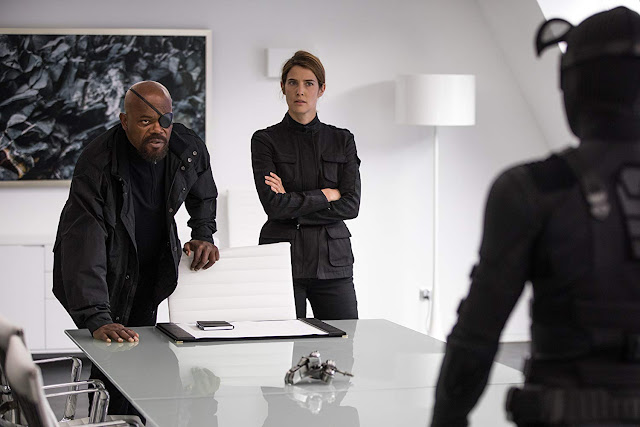 With Pete and his friends all looking exactly as they did in Homecoming, it's safe to assume they were all turned to ash by Thanos - should make the birthdays interesting! But I'm glad to say that the gang is all back, and they're off on the adventure of a lifetime. I wonder who's picking up the cheque for a summer trip around Europe? They certainly get to visit some picturesque locations, that is until something shows up and starts destroying it, anyway. Ned (Jacob Batalon) is still...well Ned, and MJ (Zendaya) is still giving everybody shit...especially Pete. I'm fairly confident that the shot of her accusing Pete of being Spider-Man is one of those moments, in fact I was waiting for her to tell him as such. I feel really sorry for Happy, who has to rescue/babysit these guys in London. Would a tranquiliser gun be out of the question? Bad idea, then he'd have to carry them. 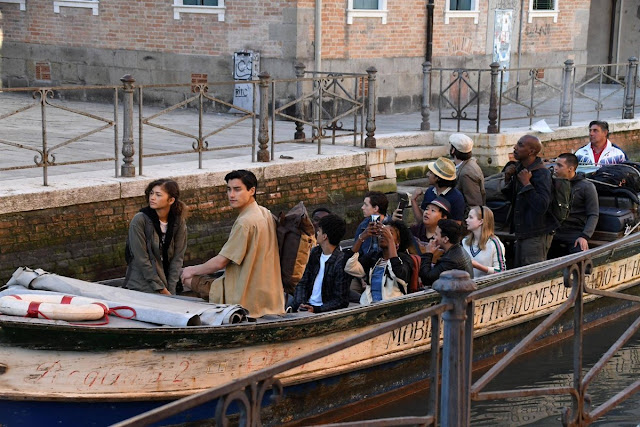 Now my favourite shot in the trailer has me conflicted. On the one hand, it's my favourite shot, it's very satisfying. On the other hand, I don't think it should have been in the trailer. Unless it ends up getting cut from the theatrical release, the joy of seeing it happen for the first time would have been immense, whereas now we shall see it coming. I am of course talking about the moment where Flash (Tony Revolori) is trying to take a selfie and some kid smacks him in the bollocks. It really is a beautiful shot...in more ways than one. Lets face it, there is nothing more satisfying than seeing a bully get taken down a peg or two!

When the first trailer for Spider-Man: Far From Home was released my initial thought was; why are you doing this before Avengers: Endgame? As it turned out, that trailer contained several spoilers. I still feel they should have waited, much like they should have waited to release Far From Home. What's wrong with an October release? It certainly didn't hurt Thor: Ragnarok! That said, this still looks like a fantastic movie, the trailer certainly shows that. As usual we are left with more questions than answers, which is how it should be. The MCU version of Spider-Man looks to be in safe hands with Jon Watts and his team, and I'm curious to see how both Peter Parker and Spider-Man deal with living in a world without Tony Stark. 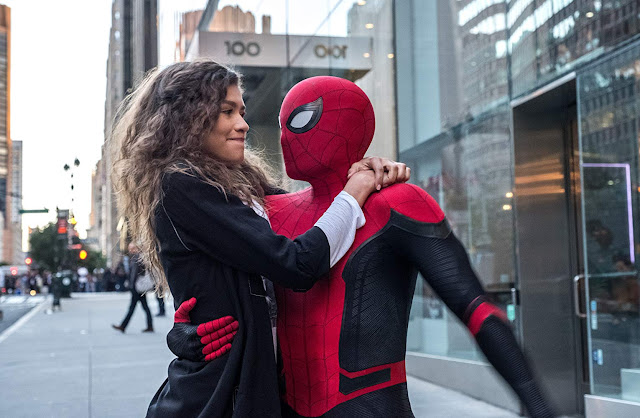 What did you think of the new trailer for Spider-Man: Far From Home? Let us know by leaving a comment below or find us on Facebook and Twitter. You can also email us at moustachemovienews@gmail.com﻿
﻿
﻿
﻿