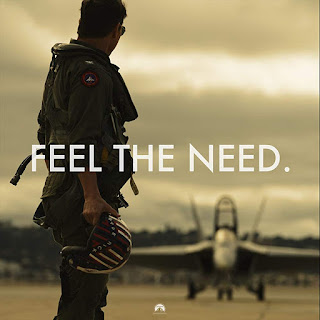 Wow! This is the gold standard in teaser trailers. Some incredible footage, with a hint or two at a potential story, and just a whisper of that classic soundtrack. If you haven't seen it, you can check out the trailer below.


Jospeh Kosinski (Oblivion) looks to be bringing the classic 80's Cold War movie into the 21st Century, and he's taking advantage of all the advanced technology that comes with it. Seeing Tom Cruise in the cockpit of an F/A-18 as it's catapulted across the deck of an aircraft carrier - not to mention the cockpit view of Cruise and the other aircraft in formation with him - looks phenomenal, and it really adds to the excitement and authenticity of the movie. Something that will only serve to immerse the audience in what they're seeing. Top Gun is known for some fantastic aerial photography, and the sequel certainly honours that legacy, with shots of fighter aircraft skimming the desert floor, a river valley and an insane flip over a mountain. We even catch an albeit brief glimpse of an F-14 Tomcat, the jet flown by Maverick, Iceman, Cougar and Hollywood in the first movie. 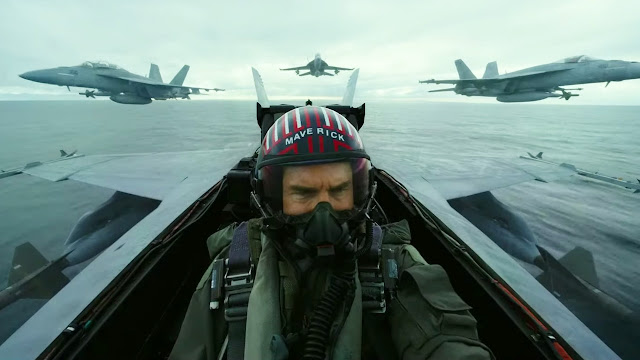 The trailer hints at certain plot points. Maverick is still living up to his callsign. 34 years since the events of Top Gun and his superiors still don't seem to like him, despite being the only pilot with actual enemy kills - still wondering how they avoided World War 3. Maverick is seen wearing some sort of high altitude pressure suit, which suggests he may be testing or utilising a new aircraft. This suit can be seen when Maverick is getting a talking to from Ed Harris' Admiral - who is possibly James Tolkan's replacement ('Stinger' in Top Gun) - and when he's seated in the cockpit of an unseen aircraft. There are rumours that the plot will feature the use of drones and the phasing out of conventional manned aircraft. This is obviously something that won't sit well with Maverick, I can't see him flying drones from an office chair.

With Cruise's Maverick very much the focus of this teaser, the rest of the cast receive the briefest of glimpses, including Jennifer Connelly, who appears to have replaced Kelly McGillis as Cruise's love interest. Miles Teller will play Goose's son Bradley, and can be seen playing a piano and rocking a moustache just like his Dad. We are definitely pleased to see the moustache's return to coolness! It would appear that Bradley is a little more hot-headed than his Dad though, as he can be seen getting into a heated argument. A funeral does appear in the trailer, could this death be the source of the friction? Jon Hamm is also seen, he will be playing a Naval Officer, nothing is known of his role, although he does appear to be searching for something. The man missing from the trailer however, is Val Kilmer, who is said to be reprising his role of Tom 'Iceman' Kazansky.

And anyone worrying that Top Gun: Maverick won't be the homoerotic, gung-ho America, cheesfest the first movie was, fear not. There are many US flags, the movie will showcase America's military might, Kenny Loggins is said to be re-recording 'Danger Zone', and there will be a shirtless/beach/sports scene, although it may not be volleyball. Glenn Powell's as yet unnamed pilot (we assume) can be seen spinning a football and looking excited whilst at the beach. Once again we can thank Hollywood for making America (look) great again.

Overall I'm very happy with this trailer, I'd be lying if I said I wasn't excited to see Top Gun: Maverick. Before seeing the trailer I was sceptical at best, but now I'm fully onboard. The movie looks exciting, the visuals are stunning, it has a great cast and...the moustache is back! Director Joseph Kosinski has some great movies under his belt, including Tron: Legacy and Oblivion. So he's used to dealing with sequels that come decades after the original and mind-blowing visuals. He's also working with Christopher McQuarrie, a regular collaborator with Cruise and an incredibly talented writer. If they can tone down the over-the-top nature of the original, Top Gun: Maverick could be *the* action movie epic of 2020. I wonder if the US Navy will set up recruiting booths in cinemas, like last time.

Anyone wanting a recap of Top Gun should check out the Honest Trailer, courtesy of Screen Junkies (see below):

What did you think of the Top Gun: Maverick teaser trailer? Let us know by leaving a comment below or find us on Facebook and Twitter. You can also email us at moustachemovienews@gmail.com