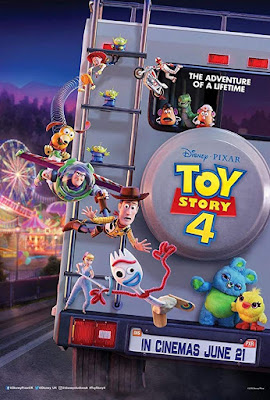 The toys have been living with Bonnie for a while now, and Woody (Tom Hanks) is having to adapt to a life without leadership. But when Bonnie makes herself a new toy - Forky (Tony Hale) - Woody takes it upon himself to show the new guy what it means to be a toy. Forky however, has a different idea. The little spork sees himself as trash (rubbish in real English), and his attempts to throw himself away result in Woody and Forky getting lost during a family holiday. Now they've got to get back to Bonnie before she goes home, and they'll meet some interesting new toys along the way.

You may be excused for thinking that Toy Story 3 was meant to be the end of the...well story. But one guy at least, had other ideas. In his directorial feature debut, Josh Cooley shows us that Woody, Buzz (Tim Allen) and the gang still have a story to tell. Something Pixar has always nailed - with Toy Story anyway - is keeping things fresh. Every adventure, instead of feeling like a rehash, does something new, takes audiences to new places, giving us a new perspective on the world of toys. We've seen the different lives of toys who are loved or abused, explored what it's like to be a collectors item, and witnessed the life of toys living at day care. Now it's time to see what it's like to live without an owner, the life of a lost toy.

When Forky attempts to lose himself (both figuratively and literally), Woody risks everything to save him. However, in attempting to get back to Bonnie, Woody is reunited with an old friend, someone that will lead him on his own journey of discovery. We haven't seen Bo Peep (Annie Potts) since Toy Story 2, her role up until now has basically been to make Woody blush, but all that has changed. Bo's a little different to how we remember her - Potts thrives in what can only be described as a much bigger role. She's tough, independent and resourceful, and Woody will need her help to get back to Bonnie. She'll also show him that there's more to life than being played with. And thanks to some stunning animation, Bo has a beautiful world to show him. Watching these movies, it really is incredible to see how the much the animation has improved. There are times in Toy Story 4 where you'll swear you're looking at something real, it all looks flawless.

Unfortunately, the choice to focus on Woody does come at a cost; the original characters are left with little to do, including Buzz to a certain extent. However, Woody does meet some new characters on his journey. Seeing Woody with Forky is heart warming, it's very much a parental relationship. Forky's existential crisis causes Woody a lot of grief, as he tries to teach Forky - who wants nothing more than to be in the trash - about being a toy. Keanu Reeves brings real weight to his performance as Duke Caboom, a showy yet troubled toy. Based on a Canadian stuntman (inspired by Evel Knievel), Duke was unable to live up to his own ad campaign, and is traumatised by the loss of the child he failed to impress. But it's Ducky and Bunny (Keegan-Michael Key and Jordan Peele) who steal the show. The pair are a fairground prize, and I think waiting to be won has kind of got to them, they're crazy! Their antics are hilarious, easily the funniest parts of the movie...watch out for the "Plush Rush". 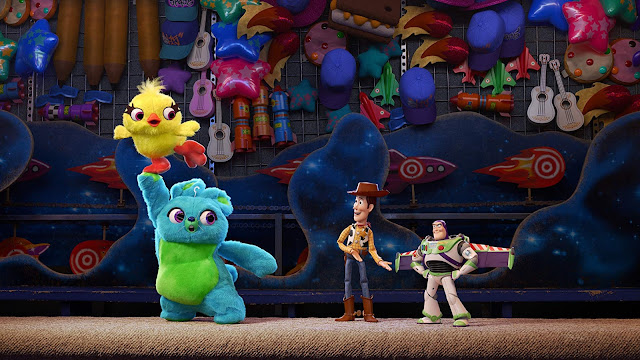 Another thing that Pixar does well when it comes to Toy Story is the villains. They're always well rounded, with more to them than simply being bad. Toy Story 4 is no different, in fact it's quite possible that this is the most interesting villain the toys have faced. She's complicated, in many ways as much a villain as she is evil. It also makes a good lesson for children that way, because as much as this story is a fun and hilarious adventure - and it is - the toys will show us that there's more than one way to solve your problems. Although, if you have a Phobia of, or issues with ventriloquist dolls, Toy Story 4 will do nothing to help you. If you thought they looked creepy before, you ain't seen nothing yet!

If like me, you thought Toy Story was done, and had reservations about its return, worry not. Toy Story 4 is another fantastic entry in a magnificent franchise. In order to bring the toys back, Pixar needed something special, and this is it. Despite neglecting some of the original characters, it is the small scale adventure of epic proportions the toys deserve. And based on what I've seen here, I not only anticipate Toy Story 5, I welcome it. 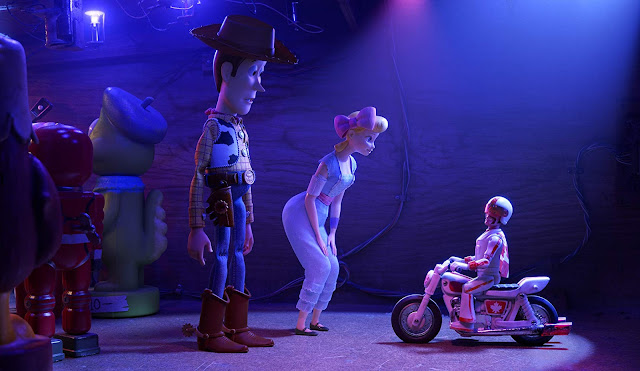 What did you think of Toy Story 4? Let us know by leaving a comment below or find us on Facebook and Twitter. You can also email us at moustachemovienews@gmail.com
﻿