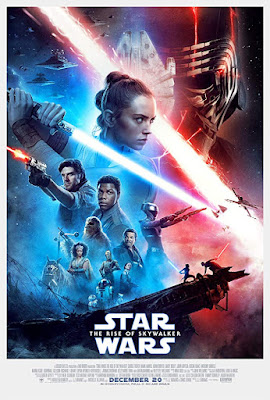 The final trailer for Star Wars - The Rise of Skywalker is here, and it looks to be on a scale beyond anything we've ever seen in a galaxy far, far away...if that's even possible. If you haven't seen the trailer (or you just want to watch it again), check it out below:

With all the information circling the final instalment in the Skywalker saga, I was expecting something quite dark and sinister when it came to the final trailer. But this actually feels quite hopeful, maybe the people at Lucasfilm are lulling us in to a false sense of security. Either way, this trailer does its job perfectly; it's both exciting and tense, it raises more questions than it answers, and the saga looks to be going out with a massive bang!

The Resistance are gathering their forces in preparation for a major battle, possibly a last stand, a battle to end all battles. It appears that Lando Calrissian (Billy Dee Williams) and Chewbacca (Joonas Suotamo) - aboard the Millennium Falcon (notice the circular dish) - will once again lead an armada against imperial forces. All of the visual effects look absolutely spectacular. I'm pleased to say that a U-Wing has been spotted in amongst the ships. Said imperial forces seem to be massing near an iceberg in space, some kind of settlement. There's a beautiful shot of a Star Destroyer crashing through the ice. Maybe it was buried in the ice, possibly with many others, waiting for the perfect moment to reveal themselves. It's also possible that the ship was hiding behind the ice and crashed through it in a surprise attack. Check out Steven Sankey on Twitter for a breakdown of some of the ships in the Resistance fleet.

While all that is going on, Rey (Daisy Ridley), Finn (John Boyega) and Poe (Oscar Isaac) have their own mission. For the first time in this trilogy the main trio are working together, they're going in search of the wreck of the second Death Star, or in the very least their mission leads them to it. It's fair to say - given that familiar cackle - they won't like what they find there. Yes as we already knew, Darth Sidious (Ian McDiarmid) is alive and by the sounds of it he has plans for Rey and Kylo Ren (Adam Driver). The former Emperor can be heard but goes almost unseen, uttering the words: "Long have I waited. Now...you're coming together...is your undoing." Does he just want Rey gone, or both Rey and Kilo? How would he benefit? Normally he likes to control powerful force users. Is it possible he's not talking about Kylo? As Finn mentions in the trailer; "the force brought us together", could there be something about their friendship that Sidious looks to exploit?

We're certainly in for some major battles; two major fleets engaged in what could be the biggest space battle the galaxy has ever seen, and two of the most powerful force users going head-to-head, and probably more than once. These two are inexplicably drawn to each other, and it seems, destined to destroy each other. But who will prevail? Is that even the idea? Could it be that they are meant to join forces? To bring balance to the force, by raising a new form of force user, one that utilises the power of both the light and dark sides of the force. As Luke Skywalker says: "Confronting fear, it's the destiny of a Jedi. Your destiny." Is Luke talking about learning from the mistakes of the past? Maybe that's why Darth Sidious wants to destroy them. After all, this story is meant to tie in all of the eight movies that went before it.

Many friends are returning for the final adventure. Rose Tico (Kelly Marie Tran) is only briefly glimpsed - hopefully this doesn't reflect her actual appearance in the movie. She is seen standing in front of Billy Lourd's Lieutenant Connix and Dominic Monaghan's unknown resistance member, as the rest of the Resistance prepare for battle all around them. Carrie Fisher will be appearing thanks to some recycled footage from The Force Awakens, it's fair to say she would be sorely missed otherwise. And as previously mentioned, Luke is heard but not seen. R2-D2 and BB-8 are also seen briefly, as is their new friend "D-O". But the most interesting character development goes to C-3PO (Anthony Daniels). We've already seen him with red eyes, now we get to see him receiving some sort of modification to the back of his head. Keri Russell's "Zori Bliss" can be spotted in this scene. When Poe questions him on it, or at least why he stopped the maintenance, 3PO replies: "Taking one last look, sir...at my friends." Now for the trailer that's a nice little acknowledgement of this being the last in the saga, but what does it mean in the context of the movie? Could it be that they are essentially removing 3PO from his body and replacing him with another droid? That would certainly explain the red eyes. 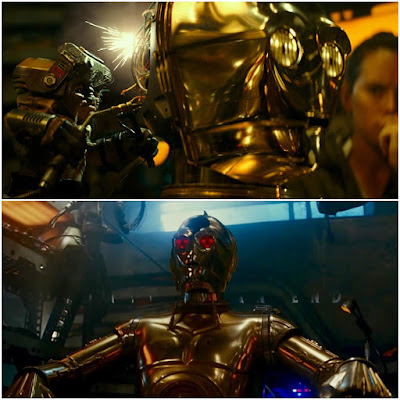 There are also those that are still missing. General Hux (Domhnall Gleeson) and Maz Kanata (Lupita Nyong'o) have been seen before and are returning, but aren't present in this trailer. Also missing from the action are Naomi Ackie's "Jannah", an ally of the resistance, and Richard E. Grant's First Order officer "Allegiant General Pryde". From the looks of it, Jannah will help Rey, Finn and Poe on their mission. She looks to be the leader of the space horse warriors - yes, since The Last Jedi Lucasfilm have doubled down on space horses - seen charging down the outside of a Star Destroyer. I'm not really sure that it makes sense at this point, but I'm sure it will. Then there's Allegiant General Pryde, where did he come from? Is he simply someone we haven't seen before, or has he been brought in to help out - or to take over from - General Hux? 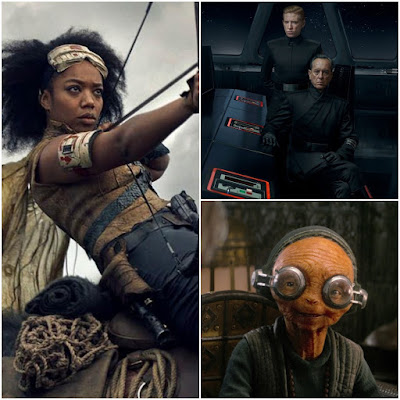 The other person going out with a bang with The Rise of Skywalker is John Williams. Not only is this is to be the last movie in the Skywalker saga, it is his last Star Wars movie and he has created an epic score befitting such an epic occasion. He has taken that epic score and somehow made it even more grand and awe inspiring than ever before.

The famous line once spoken by Obi Wan Kenobi: "the force will be with you...always" is repeated in the trailer. It's said by both Luke and Leia together, and is a fitting tribute to the late, great Carrie Fisher. More than that, it's a wonderful tribute to Star Wars itself, and the profound effect it has had - and will continue to have - on so many people. By the looks of what we've seen so far, J.J. Abrams and his crew have created the perfect finale for the Skywalker saga, an exciting and emotional story forty years in the making. But given how much it resembles a previous entry in the saga, and the biggest criticism of "The Force Awakens" I really hope that this doesn't simply become "J.J. Abrams does Return of the Jedi"!

What did you think of the final trailer for Star Wars - The Rise of Skywalker? Are you as excited about it as I am? Leave a comment below or find us on Facebook and Twitter. You can also email us at moviemoustache@gmail.com