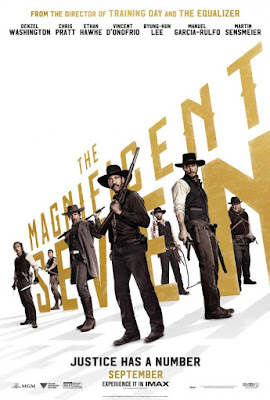 Antoine Fuqua is attempting to make the western popular again with his re-imagining of The Magnificent Seven. I say re-imagining because it's not a direct remake per say, with new characters and a new story built on the original premise, Fuqua has actually tried to bring something new to the screen. Denzel Washington stars as Sam Chisolm, a Warrant Officer hired by Emma Cullen (Haley Bennett) to assemble a group of hired guns to protect the town of Rose Creek. This time around, the seven are up against Bartholomew Bogue (Peter Sarsgaard), an industrialist who terrorises the people of Rose Creek in order to steal their land and mine the area for gold. Now new is good, but in this day and age you've got to pull out all the stops to impress your audience. 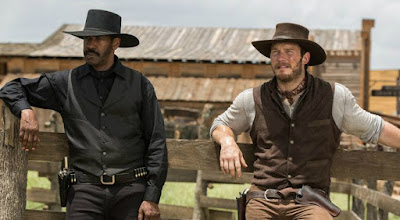 So far reaction to The Magnificent Seven has been mixed. According to critics the cast have delivered enjoyable performances but it's felt the story brings nothing new to the genre. I've even heard the movie described as a western by numbers. But isn't that what Fuqua was going for? His Grandmother - who he enjoyed watching westerns with as a child - was a major influence, in fact he apparently asked himself everyday of filming if she would enjoy watching it. The first thing my fiance said to me after the movie ended was "my Grandfather would have loved that", and I think that says it all. Fuqua hasn't tried to change the western, he's tried to make the western popular again. The Magnificent Seven certainly reminds me of my childhood in which many a Sunday afternoon was spent watching Yul Brynner, John Wayne and many others ride the plains of the old west. 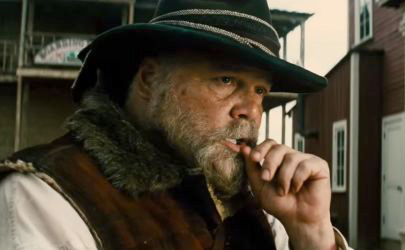 The Magnificent Seven really is a fun movie, the story keeps you engrossed throughout and it feels like the cast had a lot of fun on set. Antoine Fuqua has delivered a great cast, and has introduced a little diversity in the process. Some say it's Denzel who's drawing in the audiences and that may be true, but isn't that why you cast a great actor like Denzel Washington who can draw in large audiences? Once again Chris Pratt has been cast as the loveable rogue, something he plays in every movie, but he is great fun to watch. It's why he got the role of Starlord in Guardians of the Galaxy, his performance in Jurassic World was the best thing about that movie and it's why his name comes up every time someone discusses recasting Indiana Jones. Ethan Hawke shows great depth as the war veteran dubbed the Angel of Death. Byung-hun Lee's knife-wielding assassin is Hawke's best friend and business partner. There's a real sense of comradery between the two. Vincent D'Onofrio's Jack Horne is very much the oddball character and it's a character that suits him well, there are times when his behaviour will have you confused and in stitches all at once. Fuqua is playing to his strengths in his attempts to make the western popular again. 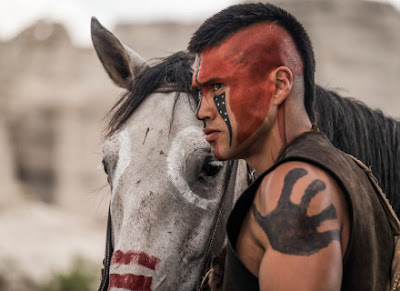 What's great is that these performances don't take anything away from the newcomers Manuel Garcia-Rulfo and Martin Sensmeier, they both have a lot to live up to in The Magnificent Seven and neither disappoint. In fact, watching Garcia-Rulfo's Vasquez banter with Pratt's Josh Farraday is one of the best things about this movie. Continuing the theme of diversity is Emma Cullen, the woman who hires the seven to save her town. Played by Haley Bennett - who between this and The Girl on the Train looks to have a bright future - Cullen is capable, determined and one of the few people willing to stand up to Bogue, despite what it has cost her. Then there's the villain himself, Peter Sarsgaard's Bartholomew Bogue, an arsehole in the truest sense of the word. Sarsgaard may not have a great deal of screen time, but what time he has is put to very good use. Bogue is used to getting what he wants, he will do whatever it takes to get it and anyone who gets in his way is pretty much fucked! What makes his performance so good isn't just Bogue's anger and violent acts, it's the nonchalance and impatience he displays in regards to the situation. To Bogue this is an annoying inconvenience hardly worth his time.

The Magnificent Seven may not break new ground but it is a fun and action packed revival of the classic western. I hope it generates new interest in the genre and we see more westerns on the silver screen in the near future. Between this, The Hateful Eight and HBO's Westworld that may not be such a pipe dream. Antoine Fuqua set out to make a western reminiscent of those he saw as a child combined with a few 21st Century ideas, I think he achieved exactly that. 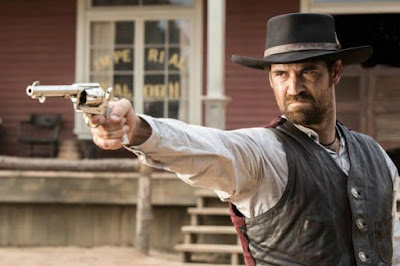 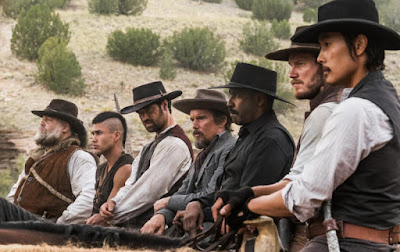