February 21, 2016
"The only way out is all in." Once you start watching The Gambler you feel compelled to see how it ends. Will he pay what he owes? Will he lose it all? Is this the story of a man's end or his salvation? 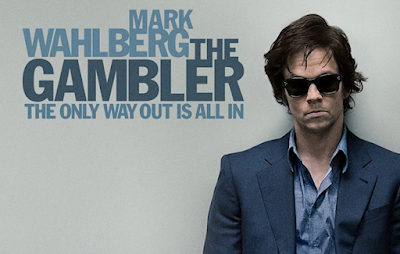 Now you may be wondering why I'm suggesting you watch a film about a degenerate gambler (Mark Wahlberg) digging himself a hole that he may or may not be able to get out of. But it's more about a man who feels life is empty and meaningless, looking for a reason to live. Now I never said this was a movie without cliche! The reason he finds is a woman; Brie Larson plays a student in Wahlberg's English class. The class is a source of his misery, it's full of talentless students who don't want to be there including two promising sportsmen who he's basically being forced to pass by the University. Brie Larson's character shows real talent and at first Wahlberg tries to keep his distance but when she shows interest in him he

finds it harder to resist getting involved with her. On the flip side there are the two loan sharks he owes thousands of dollars to - Michael Kenneth Williams and Alvin Ing - and the third he borrows from - John Goodman - to try and dig his way out of his hole. All of whom will kill him if they don't get their money and until they do, will make his life at the very least mildly uncomfortable.

Regardless of whether you like Wahlberg's character or not you have to feel sorry for him when you meet his mother (Langue). That is one 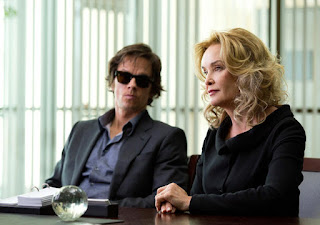 cold woman, a parent like that could screw anyone up. In her first scene she tells Wahlberg "I've said goodbye before to people I love" to which he replies "yeah, what ever did happen to Dad?" There is definitely no love between the two, she was a crappy parent but that hasn't stopped him from letting her bail him out of gambling debts over the years. It's very apparent that his upbringing is a major factor in his outlook on life and why he gambles.

Watching this movie you will spend the entire time wondering what Wahlberg is doing and what he's planning. He's given several opportunities to pay his debt and instead heads for the tables to gamble it away. So while you're thinking what the hell is this idiot doing you're also wondering if the movie will end with Wahlberg dead in a ditch. According to IMDb; Wahlberg called this the most challenging role of his career, it's definitely one of his best performances.