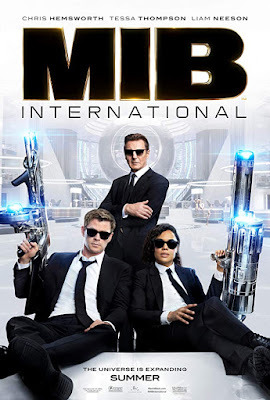 The first trailer for Men in Black International has been released, and we decided to share our thoughts. If you haven't seen the trailer yet, you can check it out below.﻿

First things first, that is an impressive cast! Chris Hemsworth, Tessa Thompson, Liam Neeson, Emma Thompson (that "Johnson and Johnson" joke from Die Hard comes to mind), Kumail Nanjiani, Rebecca Ferguson, and those are just the ones we've seen so far. Knowing this franchise we can at least expect a few interesting cameos.

It was good to see Emma Thompson return after her appearance in MIB 3. Hopefully she'll get a bigger role this time. We know Hemsworth can do funny after his performances is Ghostbusters (2016) - he was arguably the best thing about it - and Thor Ragnarok. In fact, he looks very comfortable in his new role as Agent H - maybe a little too comfortable at one point. He and Tessa Thompson worked really well together in Ragnarok, and it looks like the magic will continue here. Every moment they're together is a blast...or a flash, depending on whether a gun or a neuraliser is involved. Liam Neeson takes over from Rip Torn as the boss, he's in charge of the UK branch, although it doesn't look like that'll stop him from getting stuck in where the action is concerned. Kumail Nanjiani looks to be voicing some sort of alien, an inspired choice in my opinion. And lets not forget the wonderful Rebecca Ferguson as what appears to be the big bad. We don't see much of her, but what we do see looks positively evil. 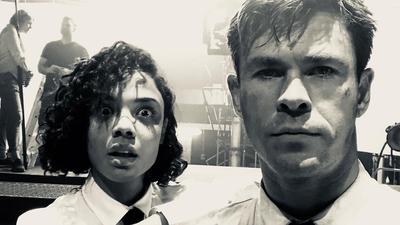 Story wise, it looks like around the time Tessa Thompson manages to track down the MIB, the clandestine organisation is dealing with their first mole. Maybe they should call Jack Bauer for help. According to IMDb the synopsis goes like this:

The Men in Black have always protected the Earth from the scum of the universe. In this new adventure, they tackle their biggest threat to date: a mole in the Men in Black organisation.

It's always their biggest threat, did you notice that? It's never a threat equal to or slightly different in nature to the last one. F. Gary Gray (The Negotiator, Law Abiding Citizen) is directing, based on a script by Art Marcum and Matt Holloway (Iron Man, Punisher: Warzone). There's some great credits there and it looks they've managed to strike the right balance between comedy and action. Lets just hope Gray didn't pick up any bad habits on Fast and Furious 8.

MIB International looks like it will stay true to the original trilogy, whilst also doing something new and exciting with the franchise. This looks and sounds like a Men in Black movie, it's got that quirky, light-hearted yet dark nature that MIB is known for. And thanks to a painting of Agents J and K, not to mention Agent O's (Emma Thompson) presence, we know this is definitely an extension of the world we see in MIB 1-3. The new setting is definitely interesting, the policing of extra-terrestrials on Earth does seem like more of a global thing. And the multiple locations allows both the heroes and villains to get into some very different trouble to what we're used to seeing. 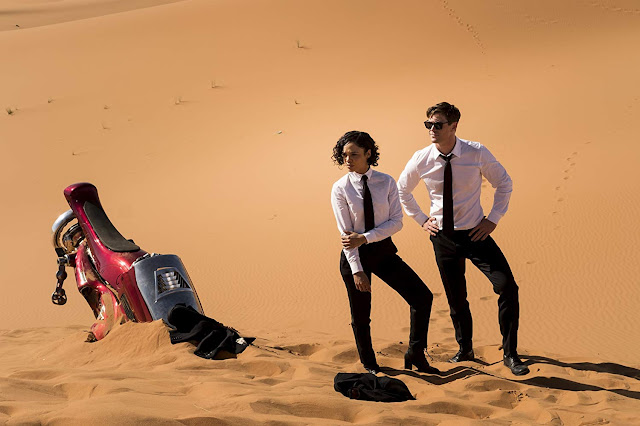 As you'd expect, MIB International has some great looking action, the shootout in the streets of London looks like a standout. Watching them assemble ever bigger weapons from pieces of their car, I imagine the look on our faces must resemble that of Tessa Thompson's in that scene. I like the idea of a conspiracy theorist/believer in aliens tracking down the MIB in an attempt at getting recruited. That sort of drive and determination is one way to get hired, and I love the cheeky grin on her face as she's getting fitted for her suit. She's like a kid at Christmas. 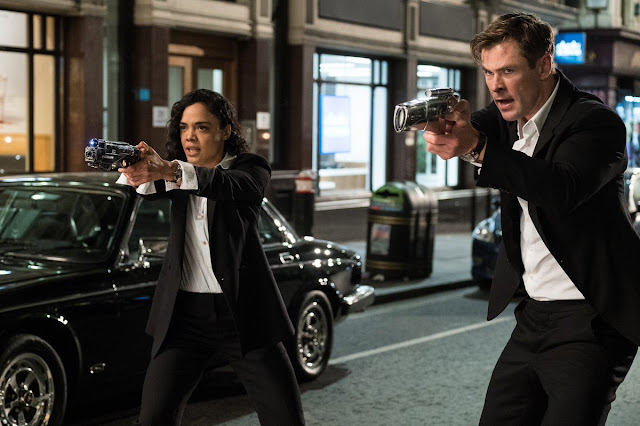 When I first heard they were rebooting MIB, I couldn't understand why! MIB 3 was terrible. And then came news of this ridiculous crossover with Jump Street, a franchise I despise. However, when the crossover idea was dropped and the casting of Chris Hemsworth and Tessa Thompson was announced, I was intrigued. My intrigue has only grown with the arrival of this trailer. I really like what I am seeing. It gave us just enough to pique our interest and make us laugh, without spoiling anything. MIB International looks to be a hilarious, action-packed follow up to the blockbuster trilogy, in much the same way as Jurassic World to Jurassic Park (although hopefully better). This could be one of the big summer blockbusters of 2019. Just not sure about that hammer joke, though.


What did you think of the MIB International trailer? Let us know by leaving a comment below or find us on Facebook and Twitter. You can also email us at moustachemovienews@gmail.com